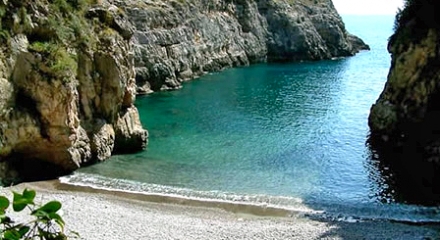 Crapolla  is one of the holy place in Sorrento Coast. The name in fact grow out from an antique temple to Apollo, some ruins are still here.   The legend talks about Saint Peter who  landed here on his journey from Palesatine  to Rome.
Crapolla is in a natural inlet, with a enchanting beach.

The path stas from “Via Nula”, near the Saint Thomas Square in Torca, a little town nearby Sant’Agata sui Due Golfi. You can easily  reach  easily the point of departure with the urban autobus from Sorrento and Massa Lubrense.
Follow  the blu signage and alking down under the shadow of the typical vegetation of chestnuts and olive trees, you will reach a small belvedere from where you can see the islets of Li Galli, Isca and Vetara.

Here begins  a nice walk down 700 steps:
After a 20 minutes’ walk among myrtle and lentisk, you will reach St. Peter’s Chapel, built upon the ruins of an ancient abbey dating back to the 11th century. Just opposite the chapel, an old watch-tower stands out, built during the Saracen attacks. Near the chapel there is a foot-path which makes it possible to cross the fiord and reach the stately tower.Walking back along the foot-path down to a quaint small bay, you will see several ruins of Roman buildings, such as the cisterns for collecting rain-water.

Read the opinions of our clients »

Would you like to receive our exclusive special offers or to be updated regularly on news and events? Register for our free newsletter!